imuno® is over 100 times more effective than pure GcMAF

Posted on February 25, 2020 by Mimi Castellanos

imuno® is over 100 times more effective than pure GcMAF

Elevated serum alpha-N-acetylgalactosaminidase (nagalase) is associated with a number of life threatening and/or debilitating conditions ranging from cancer (Korbelik et al., 1998; Greco et al., 2009; Thyer et al., 2013) to viral infections caused by influenza virus and HIV (Yamamoto and Urade, 2005; Yamamoto, 2006), bacterial infections (Caines et al., 2008), alcoholism (Zoga et al., 2017), and autism (Bradstreet et al., 2012). Nagalase, an enzyme, was first proposed as a marker for cancer and viral infections and its increased serum activity in these conditions was associated with immune system deficiency because nagalase prevents formation of the Gc protein derived Macrophage Activating Factor (GcMAF), an immune stimulant cytokine (Yamamoto and Naraparaju, 1997; Yamamoto and Urade, 2005; Yamamoto, 2006). According to the original hypothesis proposed by Yamamoto and Colleagues, cancer cells and cells infected by viruses produced and released nagalase that caused immune deficiency that, in turn, favored the progression of cancer or viral infections. Therefore, elevated serum nagalase activity in cancer and viral infections was considered a consequence of cancer or viral-infected cells releasing nagalase. In apparent agreement with this hypothesis, successful immunotherapy of cancer with GcMAF was associated with a decrease of serum nagalase activity (Thyer et al., 2013; Schwalb et al., 2016) that was attributed to the effects of GcMAF on macrophages that, once activated, attacked cancer cells with consequent decrease of the number of cancer cells producing nagalase.

This interpretation, however, was contradicted by the observation that in autism, just like in cancer, successful immunotherapy with GcMAF was associated with significant decrease of serum nagalase activity (Bradstreet et al., 2012). Since the autistic subjects successfully treated with GcMAF had no signs of cancer cells producing nagalase, nor of any other concurrent disease or infections (Bradstreet et al., 2012), a novel hypothesis concerning the role of nagalase was proposed. According to this novel hypothesis, elevated nagalase activity has to be considered more a pathogenetic factor for cancer and other conditions rather than a simple marker. In simpler words, elevated nagalase activity may be one of the causative factors leading to cancer, autism or other diseases because elevated nagalase impairs the function of the immune system and immune deficiency plays a pivotal role in the onset and development of cancer and other diseases. Such a role for nagalase is now well established as exemplified by the title of a recent review that reads ” Is α-N-acetylgalactosaminidase the key to curing cancer?” (Saburi et al., 2017a). Based on these considerations, strategies aiming at reducing serum nagalase activity may prove useful in the fight against cancer, autism, viral infections and all other conditions associated with elevated serum nagalase activity.

Here we demonstrated for the first time that GcMAF directly binds to, and inhibits, human nagalase in vitro, thus elucidating the mechanism of action of GcMAF and explaining its effectiveness in a variety of conditions ranging from cancer to autism (Saburi et al., 2017a; Saburi et al., 2017b; Bradstreet et al., 2012; Greilberger and Herwig, 2020). In addition, we demonstrate that a novel supplement containing low-molecular-weight microbial chondroitin sulfate, ultrapure phosphatidylcholine, and vitamin D3, (imuno®, imuno Corporation, Vanuatu) shows more than 100 fold higher activity than purified GcMAF.

Human nagalase and GcMAF were purified at R.E.D. Laboratories (Zellik, Belgium). The
experiment was performed using microtiter plates coated with a specific antibody able to capture human nagalase. Samples were incubated with a standardized dilution of a pool of 300 human sera from healthy subjects and, after 1 h incubation and exhaustive washing, nagalase-GcMAF or nagalase-imuno® complexes were detected with a horse radish peroxidase conjugate of a rabbit antibody. In order to establish the kinetics of interaction between nagalase and GcMAF, or imuno®, the serum pool was mixed either with 200 ng of purified Gc-MAF, or with a 1:100 dilution of imuno® in phosphate buffered saline (PBS). Since preliminary experiments indicated that undiluted imuno® exceeded the binding capacity of nagalase in the test, imuno® was diluted 1:100 in PBS. The mixture was then incubated at room temperature for 4, 24, 48, 72 and 120 h. Values for nagalase binding activity in the absence of GcMAF or imuno®, with only PBS in the reaction mixture, were taken as

1.00. The experiment was repeated twice and the results reported in Fig. 1 are the means of the two experiments. 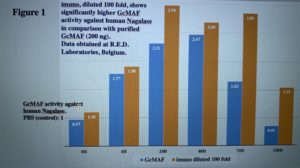 As shown in Fig. 1, purified GcMAF bound human nagalase only after 4 h incubation, reached a peak at 48 h, and returned below baseline values at 120 h. imuno®, on the other hand, had an initial value (at 0 h) higher than PBS, thus demonstrating immediate, intrinsic GcMAF activity against human nagalase. At every time point, imuno® showed significantly higher activity in comparison with purified GcMAF and, at 120 h, imuno® activity was still well above baseline, thus indicating a stronger, more prolonged activity. It is worth noticing that imuno® was diluted 100 fold and, therefore, it may be argued that its activity against human nagalase is more than 100 fold higher than that of purified GcMAF.

It is also important to consider that these results were obtained in vitro, that is in the absence of any variable or confounding factor that may hamper interpretation of results observed in clinical settings. Direct interaction between imuno® and nagalase may help explaining the effectiveness of imuno® recently observed by Antonucci and Colleagues in those conditions where GcMAF had proven effective in the past (Antonucci et al., 2019a; Antonucci et al., 2019b) and lead to propose imuno® as a more potent and intrinsically safer substitute for human-blood-derived GcMAF. The significantly higher potency of imuno® is to be ascribed to its peculiar molecular design that was described in detail in two recent papers (Ruggiero and Pacini, 2018a; Ruggiero and Pacini, 2018b); in brief, imuno® reproduces that physical-chemical features of GcMAF at a much higher molecular efficiency and density. The N- acetylgalactosamine active site of GcMAF is present in much higher concentration in imuno® thanks to the presence of low-molecular-weight chondroitin sulfate, a sulfated polysaccharide that is composed by an alternating chain of Nacetylgalactosamine and glucuronic acid. The hydrophobic moieties of GcMAF, that are the regions binding vitamin D and fatty acids, are present in imuno® thanks to the binding of phosphatidylcholine to chondroitin sulfate. Vitamin D3, essential for increasing the potency of GcMAF as demonstrated by Greilberger and Herwig in 2020, is intercalated in the proto-cellular structure formed by the core of chondroitin sulfate surrounded by phosphatidylcholine (Ruggiero and Pacini, 2018a). In fact, imuno® was designed taking into account the physical-chemical features of GcMAF that were published 2013 when a molecular model of GcMAF interaction with the cell membrane was described (Thyer et al., 2013). In this model, optimal interaction was achieved when GcMAF was non-covalently bound to a fatty acid – in that example, oleic acid – and vitamin D3 that are the conditions reproduced, at a much higher molecular efficiency and density, in imuno®.